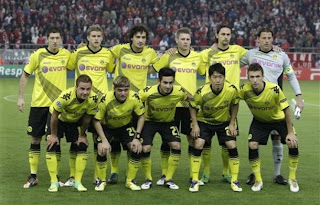 Reigning German Bundesliga champions Borussia Dortmund have their 2011/12 UEFA Champions League home kits. Manufacture by Kappa that team strip supplier since 2009, BVB will be wearing in their Champions League jersey is mainyl yellow with a black collar and black sleeve cuffs. The shirt is also designed with black curved lines which run diagonally across the jersey front and continue in the right shoulder area give the shirt a striking effect. The modern V-neck and the black arm and waistband set mirrors those of the yellow root of the jerseys. The jersey with V-neck wearing a "BVB" stick in the neck and two big KAPPA logos at the shoulders and inner the neck rounding out this design are discreet “Echte Liebe” (True Love) text and BVB logo with the Dortmund-print on the back. BVB emblem logo adorns the right side of the chest with a gold star placed above the crest on the left chest. Team sponsor, violet EVONIK logo has their name in the middle of the shirt. Main sponsor of Borussia Dortmund since 2006, Evonik is an industrial corporation in Germany owned by RAG Foundation and one of the world´s leading specialty chemicals companies, energy and real estate business. 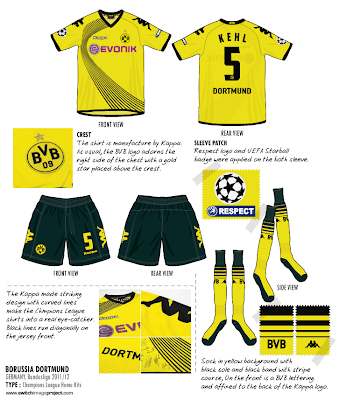 Short/Sock
These yellow shirts will be worn with the black shorts and the BVB emblem is affixed to the right and the Kappa logo on the left leg in front. Players number was worn on the left leg for the Champions League match only.The sock in the yellow background with black sole and black collar with stripe course. On the front is a BVB lettering and affixed to the back of the Kappa logo.
Borussia Dortmund is grouped with Arsenal, Marseille and Olympiacos for the Group F, 2011–12 UEFA Champions League. 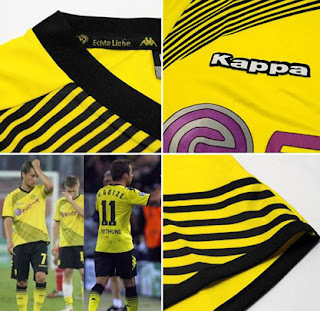 Posted by Azmie aka switch image at 4:43 PM