The one-match New York City FC jersey introduces a pretty unique design that's inspired by 'Hidden Creatures Of The Sea". The Adidas Condivo 20 Primeblue features parley ocean plastic which is made from recycled waste, intercepted from beaches and coastal communities before it reaches the ocean.
These New York City FC kits worn against Los Angeles FC on May 30, 2021. Roughly half of the 27 MLS teams have light-coloured jerseys with blue accents, while the other half have darker blue jerseys with red-orange accents. 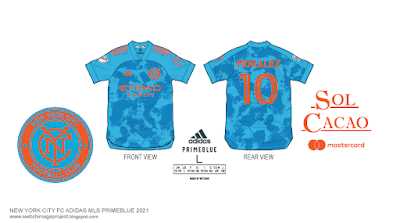 Posted by Azmie aka switch image at 10:12 PM

Hello dear
Can you provide me a font of the Saudi League 2021?