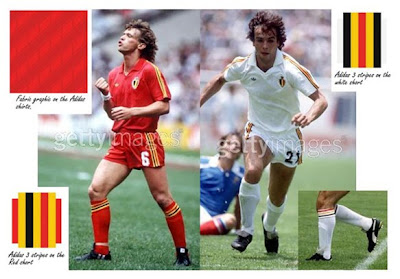 The Belgian national team or their nickname Red Devils best-ever World Cup run was in 1986 when they placed fourth under command of players like Jan Ceulemans, Eric Gerets and Jean-Marie Pfaff. Belgian team reached the knockout phase five out of six times from 1982 to 2002.

On the World Cup 1986 tournament, Belgium surprisingly won against favourites Soviet-Union 3–4 after extra time. Belgium also beat Spain on penalties, but they lost to eventual champions Argentina in the semifinal (0–2). In the third-place match Belgium lost to France (2–4) after extra time. Captain and midfielder Jan Ceulemans was the first Belgian player to be selected in the All-Star Team of a World Cup. Enzo Scifo was elected as best young player of the tournament.

Belgium match June 3rd, againts Mexico the away shirt will be played in along with the red home shorts and socks. 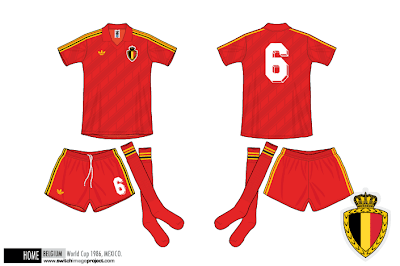 Posted by Azmie aka switch image at 8:48 PM

I'm looking for that classic font for the shirt numbers. Any chance of releasing that?

Thanks Melo, I know error on that socks, I'm updated tonight.