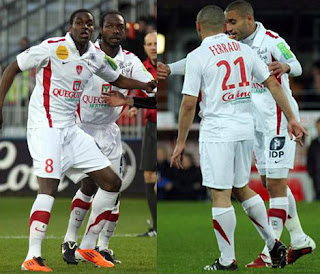 The club ranked 2nd in the 2009/10 Ligue 2 to be promoted to the top level of French football, Ligue 1, for the 2010/11 season. Stade Brestois 29 is a French football club from Brest. The club plays home games at Francis-Le Ble Stadium, holding just over 15 thousand supporters. Managed by Alex Dupont a French former footballer and football manager who has been managing Brest since 2009.
The Stade Brest or also known as Brest kits are manufactured by Nike. The main sponsor of the home shirt is Queguiner Materiaux, the shirt is very plain feature a white polo-style shirt with the red add as the detailed. Geodis Calberson and Breizh Cola are the secondary sponsors which appear on the chest of these kits. Worn with white shorts, the team sock have two design option printed players number on front.

Other club secondary sponsor Casino Supremarcies, the chain supermarkets Casino now has over 350 stores located throughout France at the back (jersey) and group GUYOT ENVIRONMENT, established in 1998 was primarily focused on recovery and recycling of scrap patch on the left sleeve. 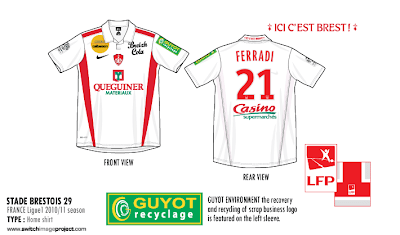 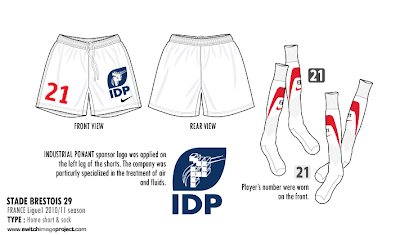 Credit to Joaquim Gaspar as always who provided their vectorized logo worked at all these Ligue 1 team collection.
Posted by Azmie aka switch image at 10:17 PM No comments: Links to this post

To satisfy few of my followers here, I'm already make a progress updated few of my old template. But recently I've got something more challenge project going on so it the output should be slow.
Already started here with the Olympique Marseille home kits. For more image visited these OM home and away kits.

Posted by Azmie aka switch image at 5:00 AM No comments: Links to this post 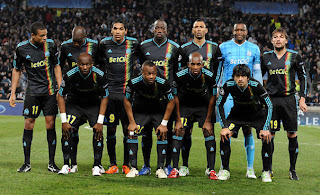 Third shirt of the French Ligue 1 Champions, Marseille’s from my view that Adidas tends to experiment something different and trying to incorporate the teams history/fan base. OM players will wear this new Marseille kits for meetings with European and some signs of prestige. The Rasta looked shirt is mainly brown
black featuring light blue detail. Red yellow green band is clearly inspired by African colors, a symbol of the mix of Marseilles. It also echoes the World Cup in South Africa, the first World Cup in African territory. Betclic, club shirt sponsor have their logo featured across the center of the shirt for the match at the French soil only. 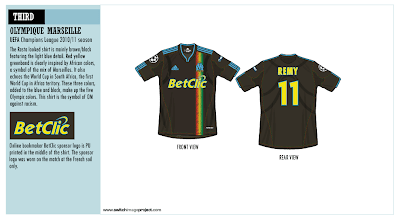 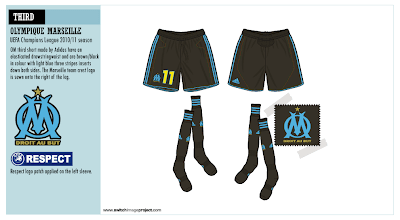 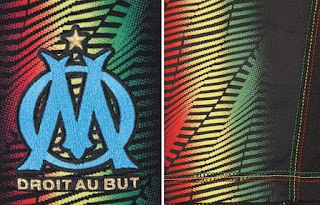 Posted by Azmie aka switch image at 10:35 PM No comments: Links to this post

As a requested and brainstorming, started fro the Marseille away kits there will be more detailed photo for references in each posted from me. Actually I'm already started the new graphic layout from the Auxerre kits. The updated included to the previous posted.
Posted by Azmie aka switch image at 11:02 PM No comments: Links to this post 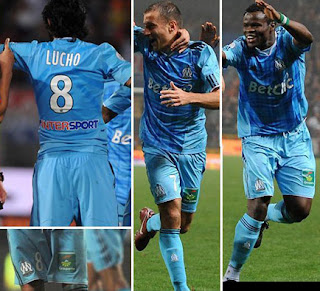 Feel not in mood for worked today, maybe too tired last few day, straight worked more than 18 hours per-day, has a sign for me to slow a bit.
In 2010, Marseille became French champions again, under the stewardship of former club captain Didier Deschamps. Marseille's home ground is the 60,031-person-capacity Stade Vélodrome located in the southern part of the city, where they have played since 1937.
OM away shirt is mostly Sky Blue. Blast off the shirt with a sky blue checkered pattern on the front of the shirt. There is white piping along the edge of the collar and sleeves. The club crest in white with the black outline is on the left of the chest and the makers have their logo on the right and have three stripes running down the sleeves in black. The BETCLIC logo has their name written across the middle of the shirt in white. Other Marselle sponsor INTERSPORT has their name written at the bottom of the number on the back of the shirt.

Other sponsor INTERSPORT the sporting good retailers company has their name written on the bottom of the number on back and GROUPAMA logo was worn on the left leg of the shorts. 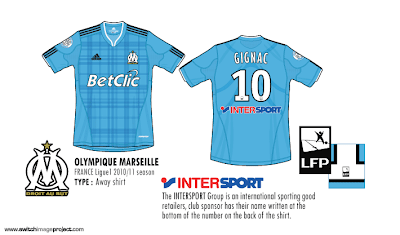 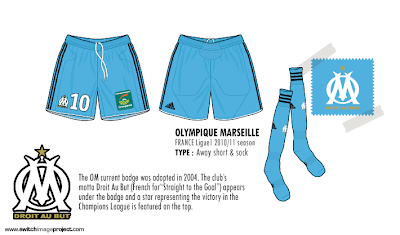 This blue long-sleeve shirt with tartan design is used by Olympique Marseille as the away shirt on the domestic league. For match the players using Adidas’ revolutionary Techfit technology with Formation tag at the bottom of the shirt. The BETCLIC logo has their name written across the middle of the shirt in white with black outline. Included on jersey French League Champions patch since Olympique Marseille won the league the previous season feature on the right sleeve and the makers Adidas logo and three strips in thermo, and manufacture in China. 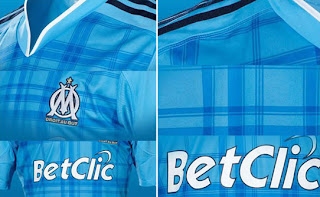 Posted by Azmie aka switch image at 5:45 AM No comments: Links to this post 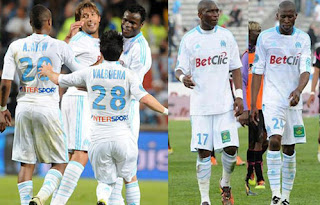 Newly crowned French soccer champions Olympique de Marseille will wear the latest Adidas TECHFIT and Climacool technologies in the manufacturing of this shirt. The shirt has a white base colour, with the sides of the collar and shoulder trademark stripes being light blue, a colour associated with the club. The Adidas logo is also light blue and placed on the right side of the chest. The body of the shirt has thin, horizontal, widely-separated, light-blue stripes. Addition of shirt sponsor logo BetClic on the centre of the shirt, BetClic has been a major sponsor of the French club for over two years.
Olympique de Marseille secured theLigue 1 title in the 2009-10 for the first time since 1992 under the stewardship of former club captain Didier Deschamps, as well as winning the Coupe de la Ligue. The club was stripped of the league championship in 1993 and relegated to the French second division after then-chairman Bernard Tapie was convicted of bribery and match-fixing offences.

Marseille's traditional kit colours were white shirts and shorts with Dodger blue socks until 1986. Since 1986, Marseille have played with white shirts, white shorts and white socks, and the blue color became lighter due to Adidas marketing. The club's current badge was adopted in 2004. The club's motto Droit Au But (French for "Straight to the Goal") appears under the badge and a star representing the victory in the Champions League is featured on the top. 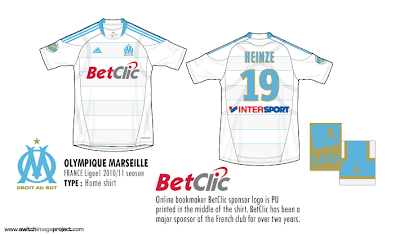 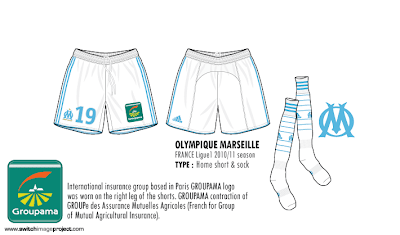 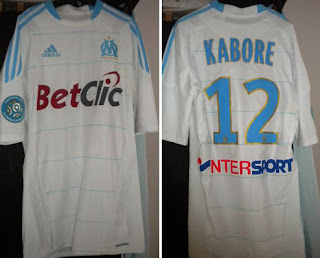 Included on jersey French League Champions patch since Olympique Marseille won the league the previous season feature on the right sleeve also feature a watermark of the coat-of-arms for the city of Marseilles on the left of the sleeve.
For the match jersey OM's worn in the league and Euro, players will be using Adidas’ revolutionary Techfit technology with Formation tag at the bottom of the shirt. Club sponsor logo BetClick position between the blue stripes (different from jerseys sold in stores). The makers Adidas logo and three strips in thermo, and manufacture in China. 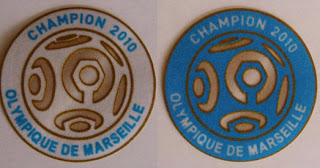 French league champions patch for home in blue and away in white. Both worn at the right sleeve.
Posted by Azmie aka switch image at 2:50 AM 1 comment: Links to this post 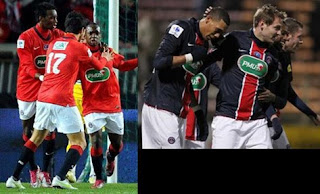 Coupe de France (French Cup) is the premier knockout cup competition in French football
organized by the French Football Federation. Commonly known as the the Coupe Charles Simon, the cup competition is named after Charles Simon, a French sportsman who died while serving in World War I and is open to all amateur and professional football clubs in France, including clubs based in the overseas departments and territories. The final is played at the Stade de France and the winner of the Coupe de France qualifies for the playoff round of the UEFA Europa League. During the France Cup both PSG home and away kits will feature with the new sponsor logo and numbers design printed on shirt. 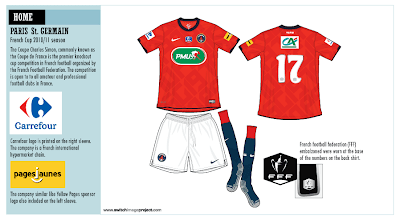 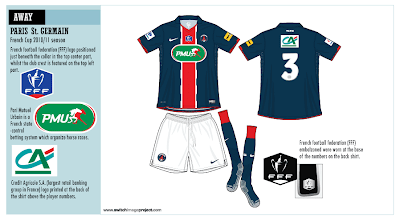 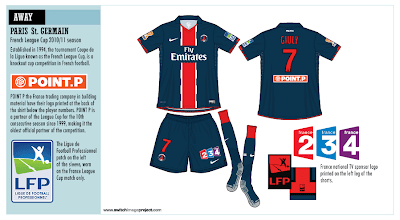 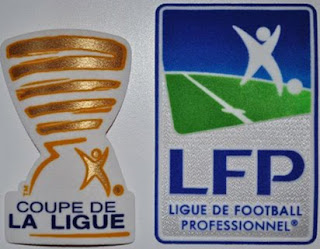 Established in 1994, tournament the Coupe de la Ligue known outside of France as the French League Cup, is a knockout cup competition in French football organised by the Ligue de Football Professionnel. The current holders of the cup are Marseille, who beat Bordeaux in the 2010 final. Olympique de Marseille became the first club to win the cup two times in a row by beating Montpellier HSC.
Every team on these tournament will worn the coupe de la ligue on the right sleeve and the Ligue de Football Professionnel patch included on the left sleeve.
Posted by Azmie aka switch image at 11:02 AM No comments: Links to this post

Here I am, after spent more than a weeks off-line. Time to make a move with the more progressive design.......Wow started with Auxerre.
Posted by Azmie aka switch image at 12:39 AM 2 comments: Links to this post