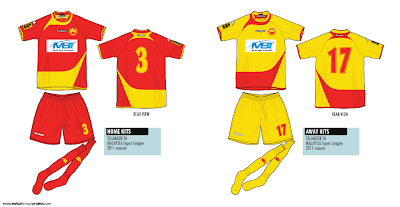 As the previous article, Selangor FA started wearing these Kappa design at the beginning of the 2011 season. Three colors have been introduced, as usual, the traditional red/yellow Selangor FA or Red Giants home kits. Yellow/red for away and very rarely used kits the navy blue shirt for 3rd kits. Significant differences jersey Selangor FA been used for 2011 and 2012 seasons were the Super League (Super Liga) patch on the right side of the jersey. The 2012 season a new logo patch was introduced with the new 'Integrity' patch logo plastered on the left sleeve. Additionally a player name and number printed behind the jersey, also players number too affixed to the right at the chest on the front. 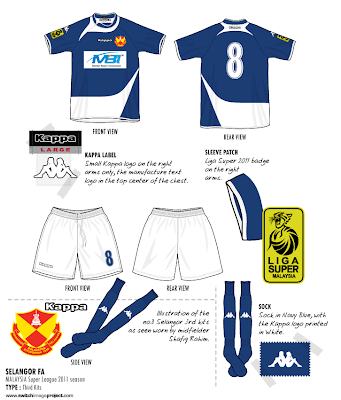 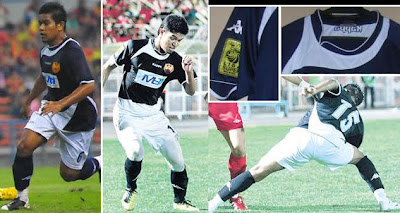 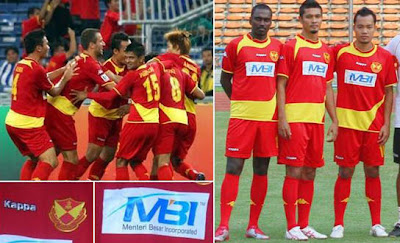 For the 2012 Super League season, the Selangor team led by new coach Irfan Bakti to strengthen this season. Former national football players, who spent most of his early coaching days as a coach with the Football Association of Malaysia in Wisma FAM. Later worked as a state coach with the Negri Sembilan, Penang FA, TMFC, Perlis and Terengganu FA. In 2007 he suddenly resigned from TMFC led to coach an Indonesian team, Persipura Jayapura. Selangor FA or simply FAS, competes in Malaysian football competitions representing the state of Selangor Darul Ehsan. The team is based in Shah Alam city and Shah Alam stadium their home grounds. Kappa still retain the supplier for Selangor team strips but used the same design on the last 2011 season. 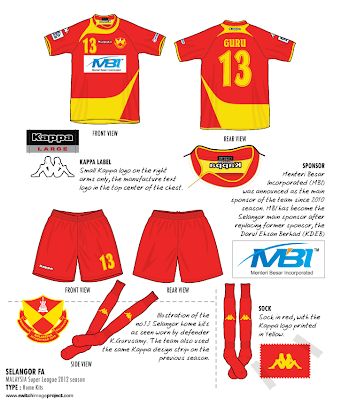 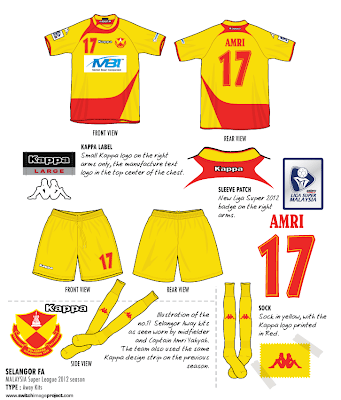 Posted by Azmie aka switch image at 8:30 PM No comments: 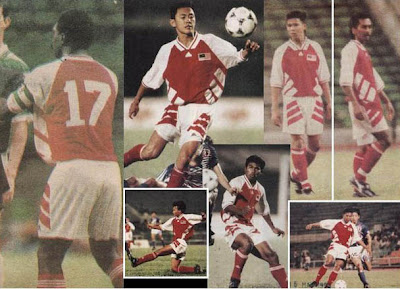 Malaysia national third kits during the years 1995-97, Adidas equipment branding went one step further with the new design, three large white symmetrical pattern on either side. Unfamiliar red color was added as the shirt detailed and shadow stripes. The new 'adidas equipment' logo in the top center of the chest and national insignia on the left.

Illustrated below as seen during the awful defeat 2-1 to Japan Olympic team in the friendly match at the Stadium Merdeka on April 1995 under Claude Le Roy, coach from French. Maizal Hairi Marzuki, Ching Hong Aik, Shahdan Zahari and Faizal Zainal among the list on Malaysia Olympic team. Other match with these rare kits are against Kedah (friendly)and Malaysia national vs Fenencvaros. 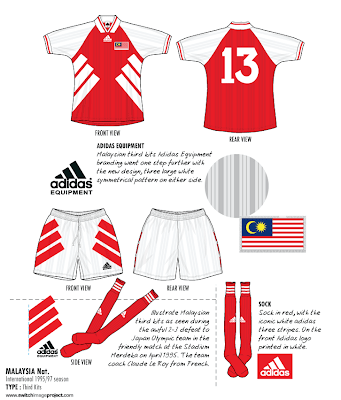 Credit to all my FB friends and noor Azmi mahmood for his sources.
Posted by Azmie aka switch image at 9:50 PM No comments: 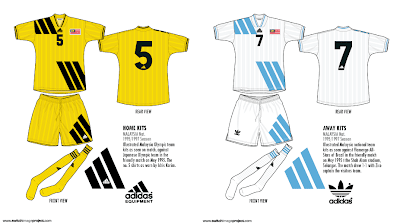 Yesterday I'm accidentally deleted few file that already finish. Solution got to recovery with other software. Frustrated.....nightmare for me

The away Malaysia shirts 1995-96 season followed the same basic design as the home. However the shirt was totally in white with light-blue trim strips. Graphic kits base on the friendly match against Flamengo All-Stars from Brazil-1-1 draw at the Shah Alam stadium, 1995. 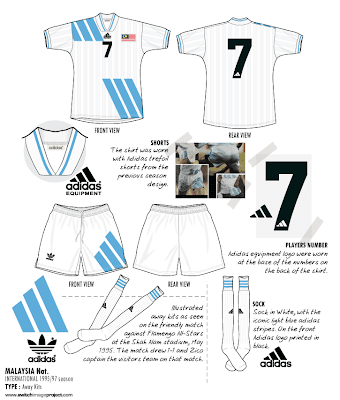 Posted by Azmie aka switch image at 7:53 PM No comments: 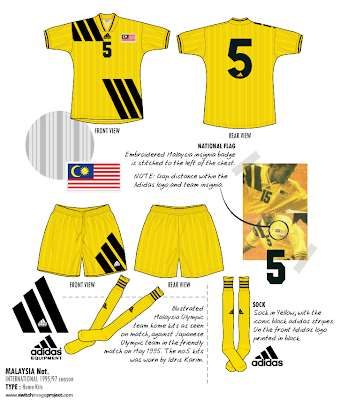 illustrated kits as worn by the Malaysian Olympic team kits during the friendly match against Japanese Olympic team on May 1995. Kits here as worn by Idris Karim. Khairil Zainal, Rusdi Suparman among the players on that team.
Posted by Azmie aka switch image at 5:39 AM 3 comments:

First new years for all my friends....and the sad news, I'm on holidays for at least a month (my second holiday since these blog started seven years. Sorry for the late noticed, I'm needed some focused for my new worked for you all.
Posted by Azmie aka switch image at 5:28 PM 3 comments: