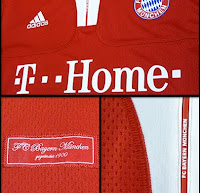 As of 2009, the home kit is red, the away kit is dark blue, and the international kit is white. The new home kits Bayern’s traditional home colour of Red. The collar is white and runs down to the front of the chest. The club badge with four star in gold is on the left of the shirt and the makers, Adidas, have their logo on the right of the shirt and have their three stripes down the sleeves of the shirt in white. The club sponsor have their name written across the middle of the shirt. The FC Bayern Munich shirt will be worn with red shirts and red socks. 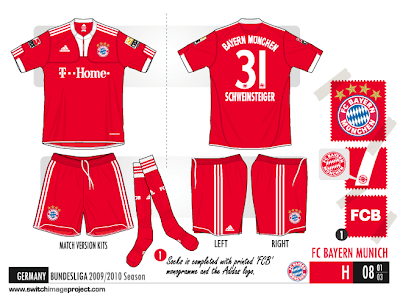 Note : Without label (as setailed photo above) for all player/match version on the bottom of shirts, only for replica jerseys.
Posted by Azmie aka switch image at 8:22 PM