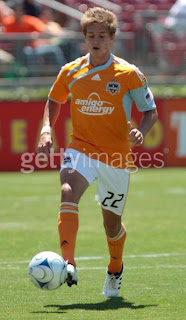 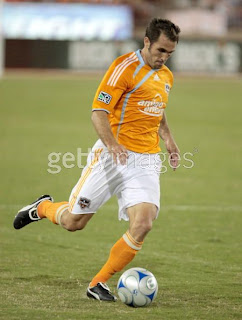 American Major League Soccer club (MLS), Houston Dynamo is based in Houston, Texas. Houston Dynamo soccer was founded in 2005, playing in the Major League soccer for the 2009 season. The league will start on the 19th March, and run until November. Houston Dynamo form part of the Western Conference, won back-to-back MLS Cup (2006 and 2007) championships in its first two seasons of existence. Houston MLS home is the 32,000 capacity Robertson Stadium, located on the University of Houston campus in southeast Houston, where they have played since in the 2006 season. The stadium also home of the Houston Cougars football and women's soccer teams. A Scottish-American football manager, Dominic Kinnear is the current head coach of the Houston Dynamo. Was promoted to head coach of the Earthquakes in 2004, after Frank Yallop left to coach the Canadian national team. Kinnear moved to Houston with the rest of the Earthquakes, when the team was renamed the Houston Dynamo. Amigo Energy became the official Houston Dynamo jerseys sponsor, Houston Dynamo soccer reached a four-year sponsorship deal with Houston based retail electricity provider, Amigo Energy, worth US$7.5M. Amigo Energy also became the official home and business retail energy provider of the Dynamo. As part of the deal, Amigo Energy established a focused marketing strategy that uses the Houston Dynamo in co-branded advertising, customer retention, and new customer acquisition programs. 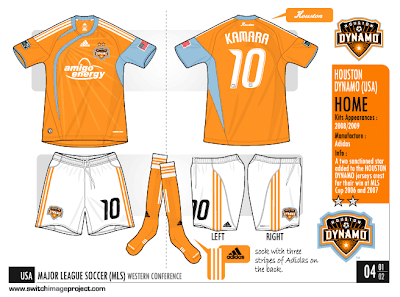 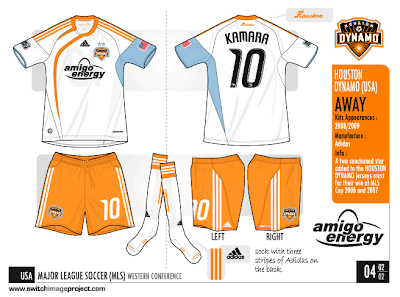 Houston Dynamo soccer 2009/10 kits is manufactured by Adidas and sponsored by Amigo Energy. The Houston Dynamo shirt design is with the combination of orange and light blue. The home shirt has an orange base colour with a light blue left sleeve. Most of the collar is light blue, with a stripe from each side of the collar running parallel towards the right of the shirt. The stripe from the left side of the collar extends down to the side of the shirt. The right sleeve has a light blue trim. On the away shirt, the design stripes are orange, on a white base colour. The left sleeve is still light blue and so is the trim of the right sleeve. Adidas use ClimaCool fabric for the shirts to wick away perspiration and keep the players cool during matches. The Houston Dynamo badge is on the left of the shirt and the makers, Adidas have their logo in the centre of the chest and have their three stripes runnig down each sleeve in white. The Houston Dynamo jerseys has the MLS badge of the right sleeve and the flag of America on the left sleeve. A two sanctioned star was added to the Houston Dynamo jerseys crest in 2009 for their win at MLS Cup 2006 and 2007. The club sponsor, Amigo Energy, have their name and logo in th centre of the shirt. 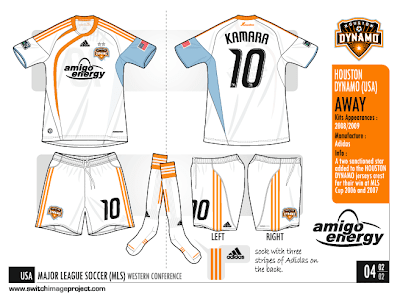 Posted by Azmie aka switch image at 5:56 AM

Reminds me of the movie Rollerball. The team's from Houston, they wear orange, and their sponsor is an energy company.